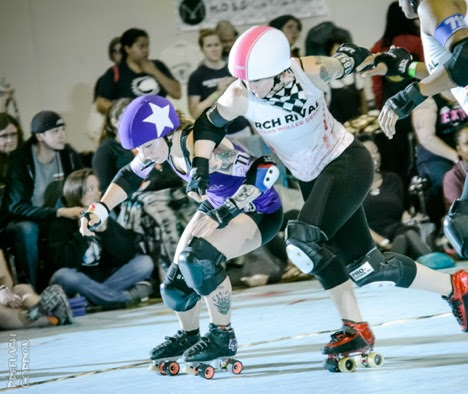 Portland, OR (June 11, 2018) – Three of the world’s top roller derby teams will travel to Portland to compete against the Rose City Rollers’ premier travel team, the Wheels of Justice, and each other in the Rose City Rollers’ “Hometown Throwdown,” which will take place from June 22nd through the 24th at The Hangar at Oaks Amusement Park.

To put the rankings in context: there are over 400 roller derby leagues around the world. To have four of top ten teams compete outside of a major tournament is rare—and a great opportunity for Portland to see some of the sports’ best athletes take to the track locally.

The Wheels of Justice started the 2018 season off with two wins at The Big O tournament in Eugene, Oregon, last month: they defeated St. Louis’ Arch Rival Roller Derby All-Stars(then ranked 7th) and Denver Roller Derby’s Mile High Club (then ranked 5th)—both teams have since risen in the rankings.

“We expect to face some of our toughest competition this season at Hometown Throwdown,” says Wheels of Justice co-captain Nicole “Bonnie Thunders” Williams. “We’ve battled Gotham—my former team—for the world championship three times and beat them in the semifinals of last years’ championship tournament. It’s got potential to be one of the best games this season.”

Hometown Throwdown takes place against the backdrop of the Rose City Rollers’ ongoing search for a new venue and is likely to be the last time Portlander’s will be able to see the tournament at the renowned Hangar.

The Rose City Rollers serve women and girls who want to play the team sport of roller derby, connect with an inclusive community, and realize their power both on skates and off. They are a 501(c)(3) nonprofit, formed in 2004, and a founding member of the Women’s Flat Track Derby Association. RCR currently serves more than 500 skaters ages 7-55 and is supported by over 800 volunteers.