The Wheels of Justice are headed to Montréal, Canada, this week to compete in the 2019 International WFTDA Championships. This will be the first time Championships are held outside of the United States.
WOJ enters the Championship tournament as the top-ranked team in the world and the number one seed in the tournament. The team’s seeding earned them a first-round bye. Their first game, scheduled for Friday, 11/15 evening at 6:30pm (EST), will pit them against the winner of the first-round matchup between Texas Rollergirls and Philly Roller Derby.
Winning this year’s Championship tournament would give WOJ their fourth all-time championship and cement their legacy as one of the sport’s dynasties; to date, only Gotham Girls Roller Derby has brought home The Hydra—roller derby’s Championship trophy—four times. Last year, WOJ bounced back from a tough Championship loss to Victorian Roller Derby League in 2017 to beat them in a finals rematch and win the 2018 tournament. 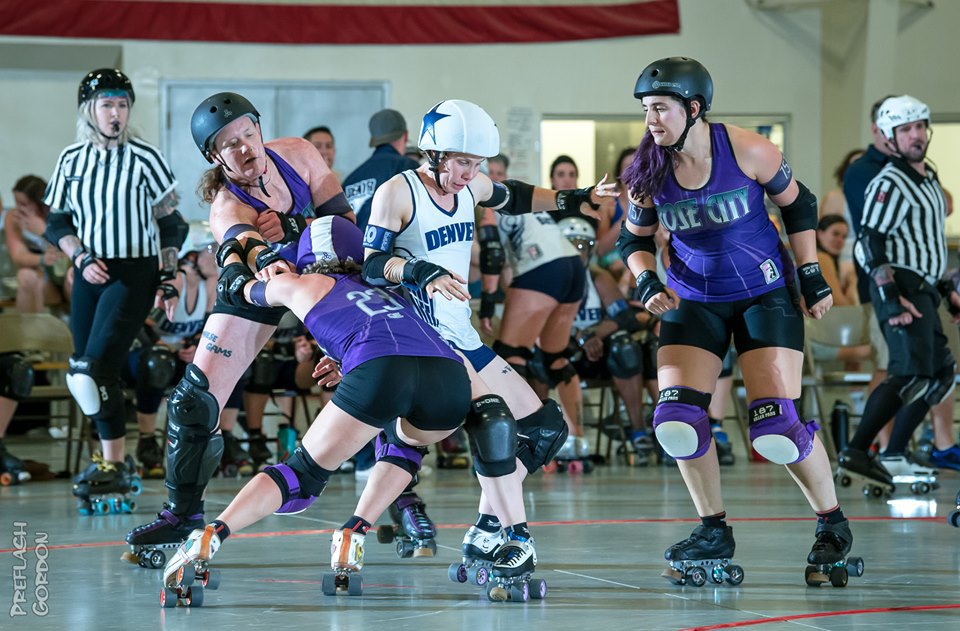 WOJ will have plenty of momentum heading into the tournament following an impressive performance in the September 2019 Thin Air Throwdown held in Longmont, Colorado. WOJ went undefeated in the tournament, winning all three bouts by an average margin of 86.7 points. The tournament included convincing wins over both Gotham Girls Roller Derby and Victorian Roller Derby, the #2 and #3 seeds of this year’s Champs tournament.
It’s been over one year since WOJ last lost a sanctioned bout. They’ve posted an impressive 10-0 record since their loss to Victorian Roller Derby League at the Thin Air Throwdown in September 2018. But this year’s tournament will by no means be a cakewalk for WOJ, the field is set with talented teams who have been steadily improving throughout the season.

The Wheels of Justice will face an experienced team in their first playoff bout regardless of who wins the first-round matchup between Texas Rollergirls and Philly Roller Derby. Both teams are no stranger to playing in Championship tournaments. Texas will be looking to improve on last year’s second-round exit to Gotham Girls Roller Derby. Philly Roller Derby started the season ranked 23rd and heads up to Montréal ranked 8th—a testament to just how tough this team is. Both teams will look to keep the momentum going in their first-round matchup for a chance to face the reigning champs.
“We feel so prepared for this weekend,” Says Nicole “Bonnie Thunders” Williams – Wheels of Justice co-captain. “Our season has been full of extremely challenging games which has charged us to adapt and continue to evolve our play to best our opponents. It’s always hard to repeat a championship but we feel ready to leave it all on track and come home with another world title.”
Beyond WOJ’s first bout, the path to the Hydra is unclear: Victorian Roller Derby and Gotham Girls Roller Derby both sit on the opposite side of the bracket and will only face WOJ if the teams meet in the Championship game. Before any of that can happen, WOJ will need to win their first bout and take down the winner of the bout between Denver Roller Derby (#4) and Arch Rival Roller Derby (#5).
Want to catch the action? Join us at the Night Light Lounge for the Rose City Rollers official watch party! Details can be found on our event page.
—–
Article by Rich Rigney