In what might have been the most dramatic game so far this season, the Heartless Heathers skated off the track with a 130-126 win over Guns N Rollers after resisting GNR’s last-jam effort to take their first win of the season.

The Heathers’ jumped out to a 23-2 lead early in the first half owing to a big 15-point jam by Freddie HerFury in Jam 3. HerFury’s jam also happened to be the most points scored in a single jam during the first half as both teams’ blockers then transitioned to playing strong defense most of the half.

Despite GNR’s defensive play, the Heathers’ jammers went on a streak of winning lead jammer, building up their lead; which culminated in Jam 15 when I Scream Cohn, jamming for the Heathers, pivot Stan the Woman, and blockers Mel Licisous, Des, and Nacho Lucky Day used a two-blocker advantage to score 7 points and give their team its biggest lead of the half: 36 points.

In the final two jams of the half, however, GNR jammers Shananigunz (Gunz) and Zip fought to narrow the point spread. Gunz quickly worked her way through the pack, secured lead, and put 12 points up on the board for GNR. Gunz’s performance was followed by Zip, who scored another two points before both teams headed into halftime with a score of 63-44. 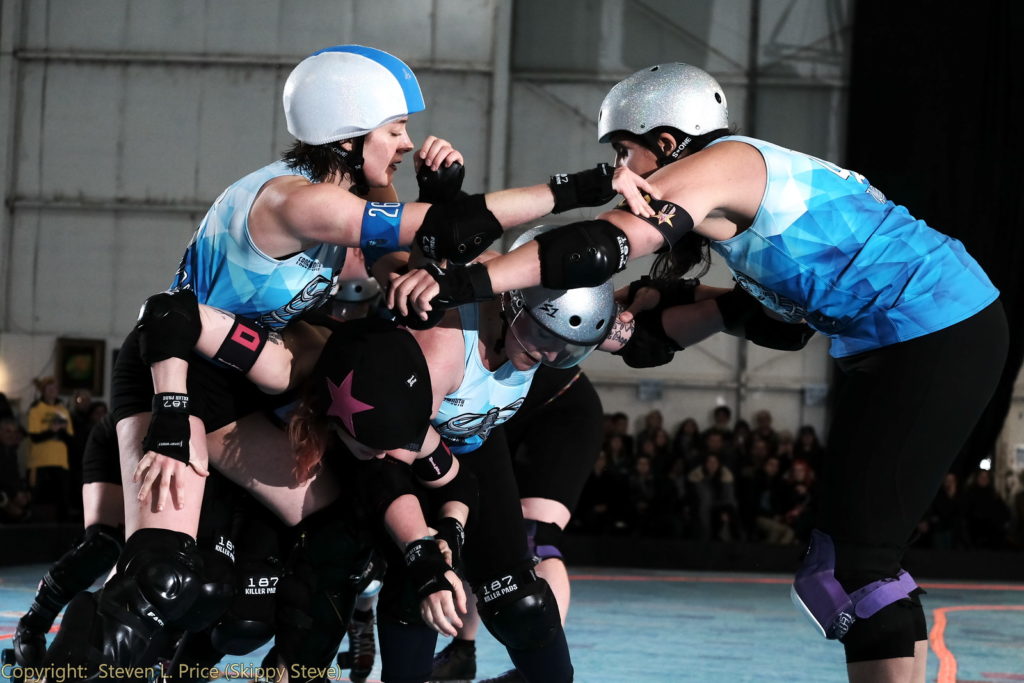 The second half saw more than its fair share of drama: in Jam 9, both jammers—Headache for the Heartless Heathers and Gunz for GNR—got penalties and swapped in the box. When Headache’s time in the box was up, she proceeded to put up 12 points on the scoreboard. GNR’s Gunz struggled to get through the Heathers’ defense and was called for a cut track for a second penalty in the jam. By the time the jam ended, The Heathers had built their lead back up to 27 points.

Jam 10 was even more interesting: The Heather’s jammer Tegan N Scare-Ya (Ya-Ya)—who led all the jammers on both teams by scoring 48 points during the bout—got lead off a power start. Gunz only had 5 seconds left on her penalty and quickly cleared the pack. Ya-Ya decided to rely on The Heathers’ defense and let the clock run; she scored 16 points but Gunz managed to rack up 12 points for GNR.  The Heathers’ took some valuable time off the clock and, with 16 minutes left in the game, they had a 31-point lead.

GNR rallied over the next five jams thanks to the work of Zip and Eve Anne Hellical.  Surprisingly, Hellical was held to just 3 points during the first half of the bout despite averaging 79 points per game this season.  GNR outscored the Heathers’ 29-6 during this streak and cut The Heathers lead to just seven point with 10:32 remaining.

Zip then took advantage of three HH blocker penalties in Jam 19 and put another 11 points up on the scoreboard, getting GNR to within just 1 point of The Heathers (119-120), which forced HH to use a team timeout.

Heathers’ MVP Blocker Nacho Lucky Day was the only Heather blocker on the track to start Jam 20 but couldn’t hold Hellical, who quickly got lead jammer. Mia Palau used some quick moves to get out right behind her. As the two sped around to turn 3, Hellical slowed and, playing some of defense of her own, knocked Mia down to buy herself a little more time to score points. Hellical fought through most of the pack and got 3 points before calling off the jam. As Hellical called off the jam, Mia did an apex jump to get past the pack but did not land it in time to get any points. GNR had completed their comeback and took their first lead of the game (122-120) with 1:44 left on the clock. They then used their last team time out.

Zip started in Jam 21, but Ya-Ya took lead and shot around the track to score 4 points before Zip cleared the pack. Ya-Ya got seven points before calling off the jam. With 33 seconds left the Heathers’ were back in the lead by 1 point and there were 20 seconds left on the clock.

GNR used their Official Review as a timeout and decided to put their 2nd half leading scorer Hellical on the jammer line versus Mia Palau. The whistle blew. It only took a few bumps and blocks before Mia broke free from the pack by jetting around the outside for lead jammer. She sped around the track, scored three points, and called the jam giving The Heartless Heathers a dramatic 130-126 win over GNR. 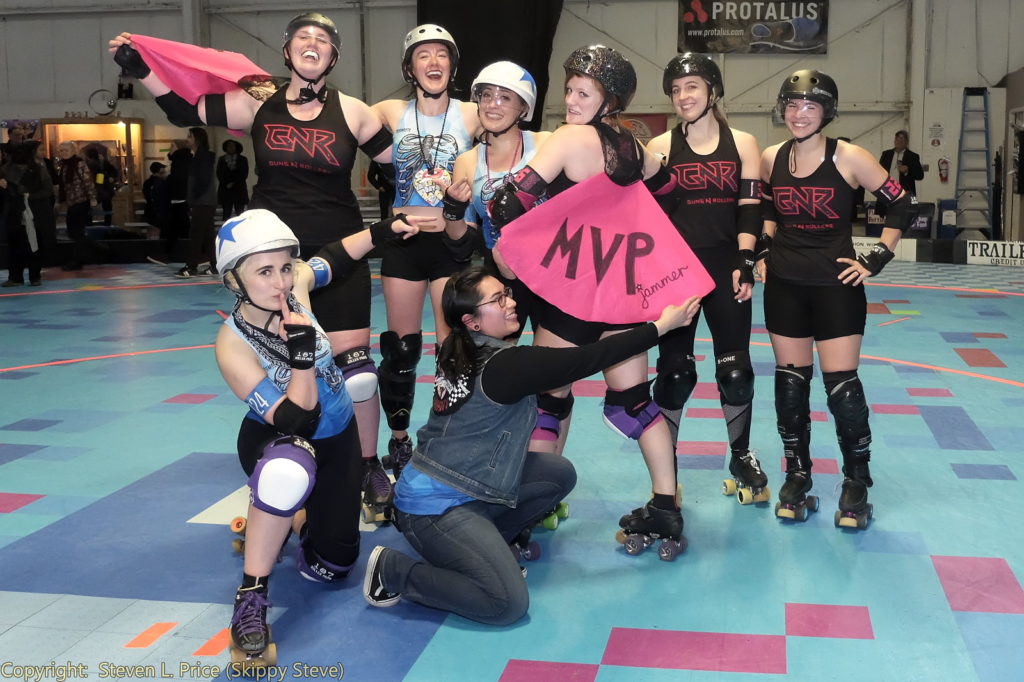