S14 / Game 8: The High Rollers Hand the Break Neck Betties Their First Loss of the Season

Led by a staunch defense and strong jamming, the High Rollers (HR) handed the Breakneck Betties (BNB) their first loss of the season on with a score of 130-122 on March 16th. Tough defensive play prevented either team from building up much of a lead throughout the bout. The HR defense held three of the Betties’ four jammers to a combined 12 points in the first half. A stellar performance from HR jammer Polly Wanna Crack’er—who led her team with 68 total points—helped hold of a second-half surge by the Betties and secure the win for the High Rollers. The Betties’ Ovarian Barbarian led all scorers with 71 points and was recognized as the team’s MVP jammer.

The first half saw the Betties jump out to an early 29-16 lead through six jams thanks to a 15-0 jam 6 by Ovarian Barbarian. HR’s defense quickly settled in allowing jammers Polly Wanna Crack’er and Lurz Lemon to retake the lead. In jam 9, Polly demonstrated her incredible ability to recover from hits time and time again, earning 12 hard-fought points in a power jam that saw the High Rollers regain the lead 44-40.

The High Rollers managed to maintain lead for the duration of the first half, stretching their advantage to as many as 16 points. HR’s Nooga Knockout helped to secure the HR halftime lead with her team-leading 41 points in the first half. Ovarian Barbarian solidly kept the Betties’ in the game by scoring 38 first-half points, with the other starting jammers combining for only 12.

To give you a sense of how strong both teams’ blockers were, there were three jams where jammers on both teams were prevented from scoring any points. In addition to Drone’s MVP-winning performance, BNB blockers Tenacity, Yermom’s Favorite, and Justine Tipp kept the Betties within striking distance of the High Rollers’ lead. By the end of the first half, the High Rollers held a 71-61 lead over the Betties.

Both teams’ defenses remained tough in the second half. The High Rollers managed to secure lead jammer in each of the first five jams but only managed one scoring pass each time. This offensive and defensive consistency allowed the HR to build up a 23-point advantage (110-87) by jam 13, their largest of the night.

At this point, the Betties took a timeout to regroup. The Betties were getting nearly all of their big scoring runs from Ovarian Barbarian; at this point she led all Betties’ jammers with 53 points. When the game resumed, the Betties lined up OB against Polly. Thanks to offensive blocks from Sprout and defensive holds from Justine Tipp, Tenacity, and Ripley, Ovarian Barbarian was able to put up 11 points.

In jam 22, the Betties jammer Beyond Thunderdame put eight points up on the board, here biggest jam of the night, and gave the betties’ their first lead of the second half, while running the clock down to 1:20.

It looked like the Betties were prepared to complete yet another thrilling comeback as they have in several games this season but, in jam 23, HR jammer Lurz Lemon fought through the pack to become lead jammer, sped around the track for two scoring passes, and gave the High Rollers the lead once again with a score of 126-122. HR took one last timeout to strategize how they might hold off the Betties for one final jam and secure the win.

In the 24th and final jam of the game, HR jammer Polly lined up against BNB jammer Dame to decide the bout. After pushing and fighting through BNB blockers Tenacity, Drone, and Ripley, Polly stretched the pack and secured lead jammer. As she came back around turn 1 to score, HR blocker Elicia Nisbet-Smith recycled Dame. Polly fought her way through the pack and, after being pushed out, called off the jam having secured a 130-122 win after scoring four points. 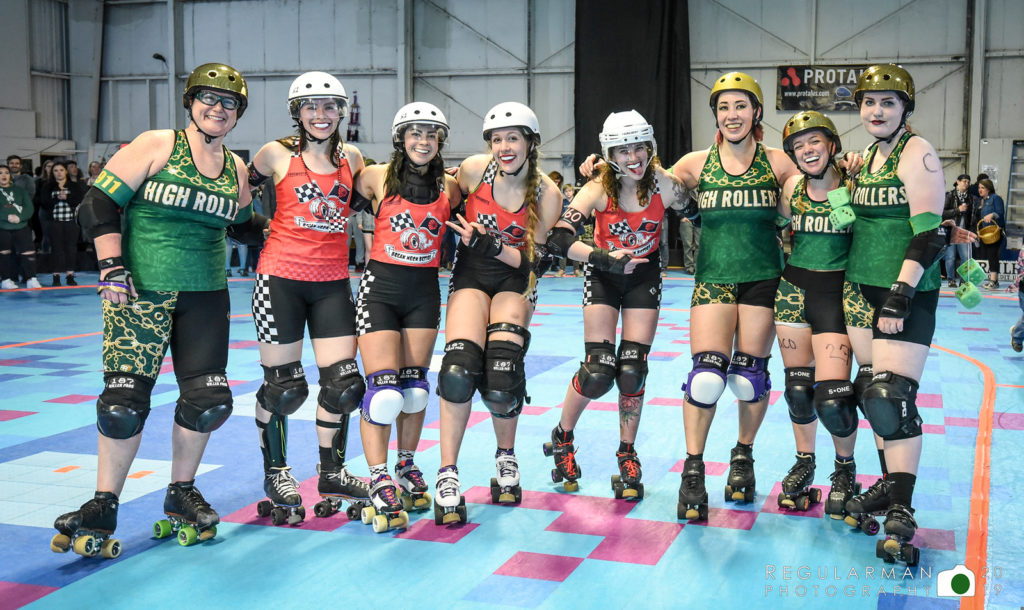