The High Rollers (HR) saved their biggest jam for the final moments of the game and came away with a hard-fought win over Guns N Rollers (GNR) 131-127 on April 5th. GNR trailed most of the game but managed to capture the lead heading into the last jam…only to see it snatched away in the final seconds thanks to a thrilling comeback by HR jammer Lurz Lemon.

As has often been the case this season, it took both teams’ defense a few jams to settle in. This was evident in the first several jams, as lead jammer was won in mere seconds. By Jam 6, however, it took nearly a minute before HR was able to secure lead jammer, and even then, they only scored four points to give themselves a 9-point lead. From there on out, it was a slog.

In Jam 9, GNR’s Eve Ann Hellical narrowed the gap by scoring seven points, taking advantage of a power jam despite some stiff defensive play from HR’s Elicia Nisbet-Smith. Jam 12 saw Lurz Lemon score her first points of the bout, racing around the track for 7 points in just 44 seconds, despite her team being down two blockers. At this point, HR had the lead at 29-20, but then GNR jammer Angela Death went on a quick 8-point scoring run in Jam 13 and the HR lead was narrowed to just one point (29-28).

Every time it looked like HR was building momentum, GNR fought their way back and kept it close—GNR’s Copernacuss, Irie Strider, Yoga Nabi Sari, and Beans were critical to making sure the game never got away from GNR.

Jam 17 was when both teams began going on runs.

It started with a 16-point jam from GNR jammer Zip, giving GNR their largest lead of the game (50-38).  Lurz Lemon trimmed the GNR lead back to one in the very next jam. Over the next few jams, HR would put together a 25-0 run to take a commanding lead, but GNR wasn’t ready to be counted out just yet. During the last two jams of the half, GNR was relentless on defense. Eventual MVP blocker, Beans, fought off some HR offensive blocks to stay with Irie Strider, and GNR blocker Licker N Split kept the HR defense broken up, which allowed for scoring from jammers Zip and Hellical to close the gap to just two points (63-61). 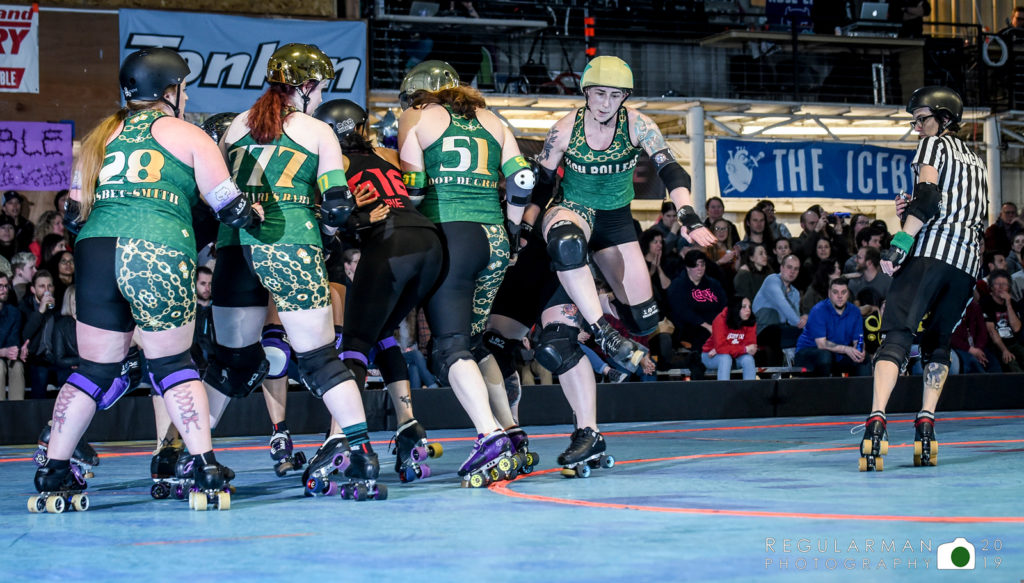 When the second half started, GNR tied the game once again thanks to scoring from Zip off of a power start in Jam 4, but by Jam 8 the High Rollers had secured their largest lead of the game (84-70) thanks to an MVP-winning performance by Lurz Lemon, who went 7 for 9 on lead jammer and scored 53 of her 75 points in the second half.

Again, despite HR’s offensive surge, GNR came storming back over the next three jams with a 17-0 run from jammers Zip and Angela Death, giving them their first lead of the 2nd half, 104-102; penalties and a power jam led to another big 19-0 GNR scoring run. With 2:34 left to play, GNR had the lead and momentum.

In Jam 22, Hellical took lead jammer and sped around the pack, keeping the clock running and trusting her defense to hold HR jammer Polly Wanna Crack’er.  Polly managed to fight through the pack and equal Hellical’s four points. HR used an official review as their last timeout, trailing 115-127 with only 53 seconds remaining.

HR needed an impressive final jam if they were going to pull off the win, and that’s exactly what they got: Lurz Lemon stepped up to the jam line and fought through the tough 4-wall of Beans, Roller Eclipse, Irie Strider, and Yoga Nabi Sari to get lead just as GNR’s Zip headed to the box on a track cut penalty. Lurz Lemon barreled around the track and put 16 unanswered points on the board to secure the win for her team.