The clacking of the skates on the track is an unmistakable sound: with it comes ten skaters, two of whom—the point-scoring jammers—are pushing their way through, dancing around, or jumping over the edges of the blockers that stand in their way. Seconds later, they all have skated further around the track, surrounded by a cloud of whistle-blowing referees.

If this seems like an odd start a story for Mother’s Day, it probably is…if we were anywhere other than The Hangar, the home of Portland’s Rose City Rollers.

Ranked the number one roller derby league in North America and the number two league in the world, Rose City Rollers is home to over 550 skaters ranging in age from 7 to 55 and supported by about another 500 volunteers. Within Rose City Rollers’ ranks are mothers, children, siblings, spouses, and significant others.

Give the holiday, we thought that we’d take a moment and ask some of our mothers—current or former skaters, or the mothers of our current skaters—how derby has shaped their lives, or the lives of their children. From them, we hear stories about body positivity, community and connection, and seeing one’s child grow with and through the sport.

All Shapes and Sizes: Roller Derby and Body Positivity

Robyn Liu is a medical doctor and who formerly skated with Rose City Rollers’ recreational league, the Wreckers, under the name Lioness. Now she cheers her daughter, who skates under the derby name of Square Not, on from the bleachers.

“Our society is such a treacherous place to raise daughters,” she says. “When Square Not was born, I promised myself that I would stock her life up with as many role models and cool aunties as I could.”

“A few months before we met roller derby, Square Not came to me distraught about her weight,” says Liu. “Understand, this is a child who had always been petite and slender—and she was only eight years old—but already she had gotten the message that weighing too much was something to be ashamed of. I didn’t have a clue about how to combat this. It kept me awake at night.”

Once Square Not started skating, though, things changed.

“Her coaches and her teammates were all different shapes and sizes, and they all praised and encouraged her for what she was learning to do with her body, and she in turn encouraged them right back,” says Liu. “You see other girls who look different from you who are also achieving, and you can develop this deep, intuitive appreciation for the fact that appearances are so much less important than determination and hard work.”

“Now, when she talks to me about her body, it’s to show off how much thigh muscle she has gained.”

Communication, Community, and Connection: Derby Opens Up The World

Leslie Pierce, who skates for the Rose City Rollers’ Wreckers under the name ManaTease, is mother to the now 12-year-old Screamsicle. For Leslie, roller derby has been as much a matter of personal growth as it has been watching her daughter continue to grow into a strong and adventurous kid. 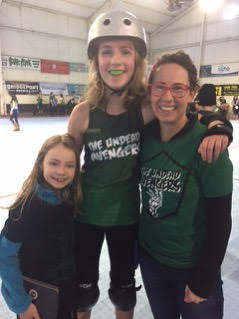 Leslie Pierce and Screamsicle trackside at a recent roller derby bout.
(Permission to use photograph for this article granted by Leslie Pierce.)

“Two weeks in Screamsicle told me her coach, sLoLo, said I could play too,” says ManaTease. “My initial thought was that I wasn’t tough enough or young enough to tackle roller derby.  I knew that these weren’t reasons that sounded valid enough to share with an impressionable 9-year-old. So I put the skates on and it’s been a wild and fun ride ever since.”

“Screamsicle is now a 6th grader and navigating all of the life changes that occur during this challenging period. Roller derby has also made the world a less small place: she doesn’t rely wholly on her school friends for social validation because she also has her teammates—girls from 12 to 18 with a myriad of body shapes and sizes and world experiences—to help her grow.”

This sense of community and closeness is not limited to Screamsicle and her teammates.

“Roller derby has also opened and connected our worlds by giving us a language that only comes with roller derby,” adds ManaTease. “At a time when it can feel hard to connect with things that are real versus what our smart phones are telling us, the bruises, frustrations, and highs that come with playing roller derby give us a solid way to connect. Being surrounded by strong, confident, and inclusive skaters has been a true inspiration for us both.”

Cultivating One’s Sense of Self: Moving Past Labels and Limitations

“I could talk for hours about how roller derby has changed my kid’s life and my own,” says Bettie Newell, mother to skater Alexander Slamilton. “Slamilton came out to us when they were nine. They were really struggling to find a place to fit in. There are great resources for trans- and non-binary kids in Portland, but Slam wanted to be out in the world, not tucked away with other gender non-conforming kids.”

“When derby was recommended to us, Slam’s initial response was a hard ‘no’ because it was perceived as women’s sport. We came to watch a bout a few months later. I’ll never forget the moment Slam turned to me and said, ‘I want to do this!’”

As a mother to a non-binary child, the community in and around roller derby impressed Newell. 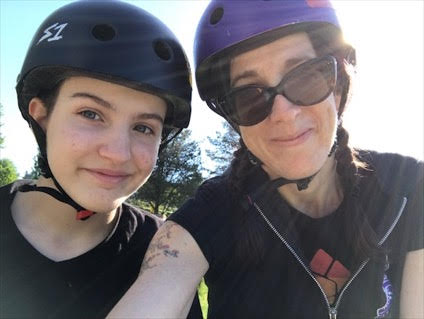 Bettie Newell and Alexander Slamilton at the Skate Park.
(Permission to use photograph for this article granted by Bettie Newell.)

“It was so refreshing to step into a community that represented so much more of the broad and beautiful gender spectrum. It was no small thing for Slam to come to a practice and see other skaters with their pronouns on their helmets, and to see that those pronouns were not limited to she/her. Slamilton has forged strong and authentic friendships with other kids, the kind of friendships that can only come from being able to show up fully as you are.”

This sense of empowerment is not limited or felt by Slamilton alone: last summer, Newell, along with “some of [her] favorite derby mamas,” started Rose City Rollers’ Derby 101 program because it looked like fun. Nearly a year on, roller derby has had as much of an effect on her as it has had on Slamilton.

“I had no idea that I would fall in love with the sport. Playing roller derby has allowed me to examine my own self-limiting labels,” says Newell. “When I arrive for a practice, I can be fully in my body in a way that I’ve never been able to. I can take up space without apology. I am surrounded by—and have the support of—fierce, incredible athletes. We are taught to embrace and utilize the things about ourselves that maybe we’ve never seen as assets. There is no one right way to have a body, no one right way to identify in the world. My ideas of what it means to be a woman, a mother and an athlete have grown exponentially.”

Coaching, Compliments, and Making It Better: A Coach’s Perspective

Sharon Ferrier, who is better known as Maye Daye with the Rose City Rollers community, has a slightly different perspective: in addition to playing roller derby since 2012 and skating with the High Rollers since 2014, she sits on the Rose City Rollers’ Board of Directors and coaches the Killer Bees, one of Rose City Roller’s four teams for skaters aged 7-12. Her daughter, T.N.T., was just drafted onto a Petals Team—the league for 7-12 year olds—after successfully completing the Butterflies Program, which prepares young skaters for increasingly competitive play.

“Throughout the past year, I have learned so much about them, myself, and how roller derby can be used at every level to guide discipline, self-confidence, and supportive communities,” says Ferrier.

No small part of Ferrier’s success and satisfaction comes from Rose City Rollers’ relationship with organizations like the Positive Coaching Alliance. Rose City Rollers, like every roller derby league, strives to ensure that its skaters’ experience on the track supports their physical and emotional growth. 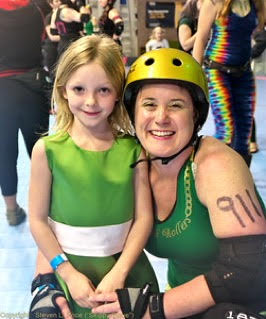 Sharon Ferrier and T.N.T. smile for the camera after a bout at The Hangar.
(Photography Credit: Steven L. Price)

“For our youngest skaters, roller derby is not about being perfect: it is about journey to learn and eventually master individual skills and team gameplay. I love to recognize the persistence it takes to keep getting better.”

As the mother of a young skater, Ferrier does not just see the power of this persistence in young skaters at the track; she also sees it in her daughter.

“I see the reflection of what T.N.T. has learned on the track every day. Her growth mindset is at work, her persistence is constant, and her awareness of others is on point! I am so proud to be raising a child that I know will contribute to making it all better.”

“Keep making it better” is one of Rose City Rollers’ core values.

If you would like to know how you or someone you love might get involved roller derby, check out Rose City Rollers’ aptly-named Get Involved page. If you have never been to a roller derby game, you can see all of our upcoming bouts on our Events page. If you don’t live in the Portland-area, there are over 400 World Flat Track Derby Association-affiliated roller derby leagues around the world.