This is the third in a four-part series about Rose City Rollers’ effort to re-invent how it presents our bouts to our fans and members.

In the first piece, Jonathan and Dennis described what the process of building a program for Rose City Rollers’ new boutcasting system was like, to include the discussion of some of design principles that guided their work. This installment of the series is about understanding some of the technical and technological forces at play around building a system. 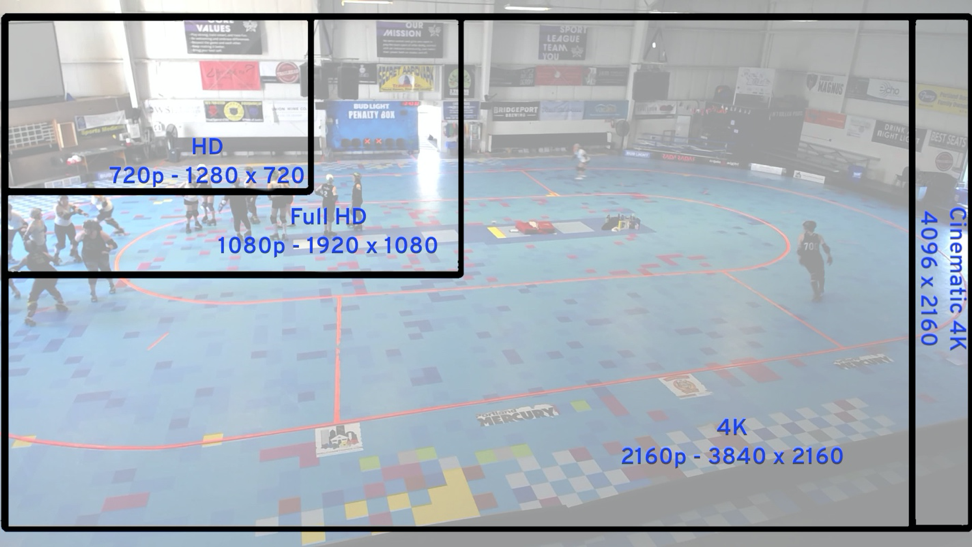 You’ve seen diagrams like this before but they can be misleading: they make you think that you’ll miss some of the action if you choose a lower resolution. That is not the case. Diagrams like this simply to represent the number of pixels in your frame: 720p means that your video is 1280 pixels wide and 720 pixels for the high.

Where resolution comes into play is how you consume video. Think of your phone versus a big screen TV: a 720p video must stretch each pixel to span the distance of the screen. 720p on a phone? No problem. A big screen TV? A 720p image pixelates because of how much each pixel needs to stretch to fill the space where A 4K video’s much more compact pixels easily fill the same display. 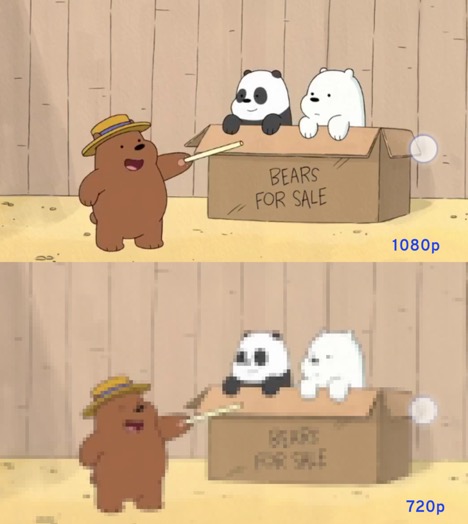 You will also be presented with the option to use interlaced video, designated by an “i” with the resolution. 1080i is a popular format, but we recommend that you to avoid it. While 1080i is computationally easier for your machine to process, it often causes tearing in the video. Interlacing draws one row of pixels, skips the next, draws the third row and all odd rows until the end, only then does it come back to draw the even rows. By the time the even rows are drawing, a skater has already moved, creating a “combing” effect.

Techno-sorcery: One Camera, Many Shots
If you have a 4K camera and are only looking to produce a 1080p live stream, you can make it look like you are using more than one camera.

Remember that video resolution diagram above? It nearly shows the trick.

The idea is simple: you capture the frame you need out of the available pixels from the camera. With this approach, you can capture multiple scenes, or camera views, from a single camera. This is mostly useful as a method to focus in on high-activity portions of the track. 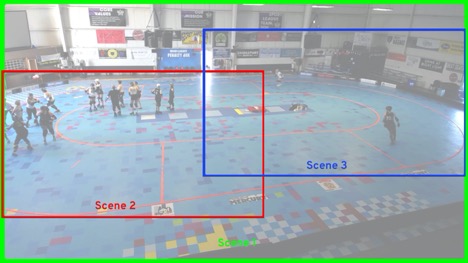 Try not to push this trick too far, though: each new scene is another time that your PC must process that entire video from the camera.

Video Resolution + Compute Power
If you’re building a boutcasting system, you probably want to use the highest resolution you can. The challenge is that higher resolutions puts greater demands on your computer, especially if you are running multiple cameras.

Streaming video requires your computer to process the video at least three times: it displays the video to you, it processes it for the livestream, and it transmits it up to the internet. You’re probably going to process the data a fourth time (to record the bout) and maybe a fifth time if you are managing the actual livestream through YouTube, Facebook or other from that same PC.

(Take a look at our last post for a description of the computer that we ended up using.)

Video File Formats and Bitrates
Another dimension to boutcasting is video file format. There are pros and cons to all formats, balancing speed with reliability and file sizes. Generally speaking, you’ll probably want to record in MP4 with the H.264 format. This will produce fairly small file sizes with great image quality, at the right bitrate.

MP4 works superbly for streaming, but has a crucial flaw to be aware of for recording: the file needs to be finalized for it to work. That is, if you lose power or turn off your software before you stop recording, you will lose the entire recording. Recording in FLV will allow you to recover the already recorded video, but is a much more complicated format to work with for processing highlight reels and such.

Finally, there is the topic of data bitrates. Bitrates will affect color saturation, clarity and the smoothness of the video. A higher rate is better, but again, your PC will only be able to handle so much, and the bitrate directly changes your data upload for your internet. Google recommends a data rate of 3,000-7,000 Kbps for 1080p video. We’ve seen good results with a rate around 4,500 Kbps, but noticeably better results at 6,500 Kbps. You will need to play with this number as you go, to find the balance between video quality and the limitations of your PC and/or internet connection.

How does the platform for fan engagement affect some of your technical choices?
One of the things that we quickly encountered was that people have strong feels about where they want to watch streamed bouts. As a league, you have a finite number of choices, each with some technical opportunities / limitations that you’ll want to consider:

YouTube
While YouTube is one of the best performing services, allowing streaming up to 4K, the platform has strict guidelines for content. If your system streams or records copyright protected music, for example, YouTube may not be for you. In addition to the live stream, YouTube is a fantastic place to upload your recorded bout videos, offering you two tools in one.

Twitch
Designed for steaming video games, Twitch has matured to accept other streaming content, including roller derby. The platform allows 1080p streaming, uses a simple interface and has decent options for monetization.

Facebook
Although Facebook is a very popular platform for communities to come together, they are not a video platform. That said, they offer live streaming up to 720p and a very familiar platform for many users.

Vimeo
As one of the least used video platforms available, Vimeo offers streaming up to 4K resolution, automatically archives your presentations into your channel and has, perhaps, the best controls for monetization and paywalls. However, the service currently runs for $75/month and pairs best with a paid video switching solution.

Multiple platforms
Ideally, we would all broadcast our streams to multiple platforms at once. The process can be simple using paid third-party providers, or it can be wildly complicated with in-computer options. Managing multiple platforms becomes labor intensive, requiring a manager for each platform during the stream.

One you have an idea of where you want to engage your fans, you can start thinking about the equipment that your league will need.

One thing that you might be wondering is, “Can we broadcast to more than one platform?” The short answer is yes. The longer answer is doing so likely comes with higher costs.

###
Up next: our final installment, which looks at sports videography and in-video graphics!