Love watching derby? Us too. Nothing beats sitting trackside with a cheering crowd and up-close views of offensive strategy or apex jumps. But derby happens near and far – spanning multiple timezones and geography. So, until we’re able to win the lotto or locate Doc Brown’s DeLorean, we’ve been working on how we can bring derby straight to you – no matter where you are.

For the past 6 months, a core group of incredible volunteers have been working tirelessly to revolutionize our livestreaming system. The best part? It’s way more accessible, and way less intimidating than it seems. We’re here to talk about how we did it—and share that you can too, no matter the size of your league.

This is Part One in a series, on how Rose City Rollers reimagined the way we show derby to the world.

At the end of June, GoPro donated five Hero7 Blacks to the Rose City Rollers (RCR) so that we could up our boutcasting game. The donation resulted from the work of two of our fans / volunteers, Jonathan Feist (JF) and Dennis Gleeson (DG; also @pdxderbydude on Twitter). The two met last year at the International WFTDA Championships in New Orleans and developed a friendship over the course of our 2019 home team season. 2019 was a challenging year for us because the commercial provider that the league historically used to stream and record our games became too expensive for us to continue using. The stop-gap measure we used created some exciting new opportunities for fan engagement, but the video quality failed to meet our expectations and the expectations of our members. In stepped Jonathan and Dennis offering to help…

What are your backgrounds and how did you come to roller derby?
JF: As a full-time technology journalist, and long-time technology enthusiast, my computer sciences degree was merely a springboard into the world of electronics. I love this stuff and am pleased to bring it to a league in need. I am married to a wonderful woman that skates with, volunteers for, and now holds leadership positions in the RCR. Her passion for the sport and this league is infectious, as is Dennis’, so it was easy to say yes to this adventure.

DG: Professionally, I am an analytic strategist: I look at how data, technology, and analytic practices might intersect to create more value for organizations. I came to derby while visiting friends in Portland back in 2011: they took me to an RCR double-header and I was hooked. I see Rose City roller derby as a quintessentially Portland experience. When I moved to Portland in 2016, I became a season pass holder and a volunteer with the league and, most recently, joined the league’s Board of Directors as a Director at Large.

Where did you start?
Our desire to improve how RCR streamed and recorded its bouts coincided with Chad of NERDerby’s excellent talk and description of resources on streaming (Part 1 and then if you want a more robust system Part 2).

If you haven’t listened to Chad’s talk, you should: both of us are comfortable with technology but are not video production guys. Chad’s talk gave us a solid baseline to work from.

A few months later, one of RCR’s members put us in touch with Grimes & Punishment, who runs The Big O’s video operation. He was kind enough to give us a tour of the operation during the tournament.

Like most things in the roller derby community, folks are incredibly generous when it comes to sharing their experiences, knowledge, and insights—everyone should take advantage of that.

From there, it was a lot of experimentation, conversation, and research.

Our bottom line: any league can build a system to stream and record its bouts.

Hopefully, by sharing our experiences, we’re going to add to the number of folks committed to helping leagues around the world do something awesome.

What was the process of designing the system like?
We used Chad’s talk as the basis for the system that we wanted to build: as fans, we wanted 100 percent coverage of the track in high resolution (at least 1080p). We ran our preliminary thinking about camera angles by skaters like Licker N Split and Irie Strider so we had a better understanding of what they looked for in videos. From there, we ordered our first webcam and started to walk it around The Hangar to see what shots were possible (we eventually made this video, which was shot with a used GoPro, for league leadership and staff).

One of the things we learned: document which camera you use, what resolution you’re shooting at, and what angle you’re shooting from. We ended up taking photos of The Hangar’s interior and labeled the columns so we always had a common frame of reference.

What was the first conversation with league leadership like?
It was pretty basic: we walked Rocket Mean and her staff through the limitations of the technology we were using at the time, showed them the test footage so they could get a sense of what we were aiming for, and presented them with our estimated budget for a six-camera set-up using webcams.

To develop the budget, we did A LOT of research and things like measure the distance from likely camera positions back to where we would operate from (so we knew how much cable we would need), and then we used Amazon Smile to price out the components so ordering would be easy (and the purchases would generate a small donation back to the league).

The reaction was very positive: we were told to think more boldly. The key, we think, was documentation and evidence: we could show what we did and how we did it…and we could talk through options we had considered but ruled out.

The meeting also allowed us to have a conversation about the league’s goals, aspirations, and constraints. This conversation became the basis of our design principles, which helped keep us on track through the development process. 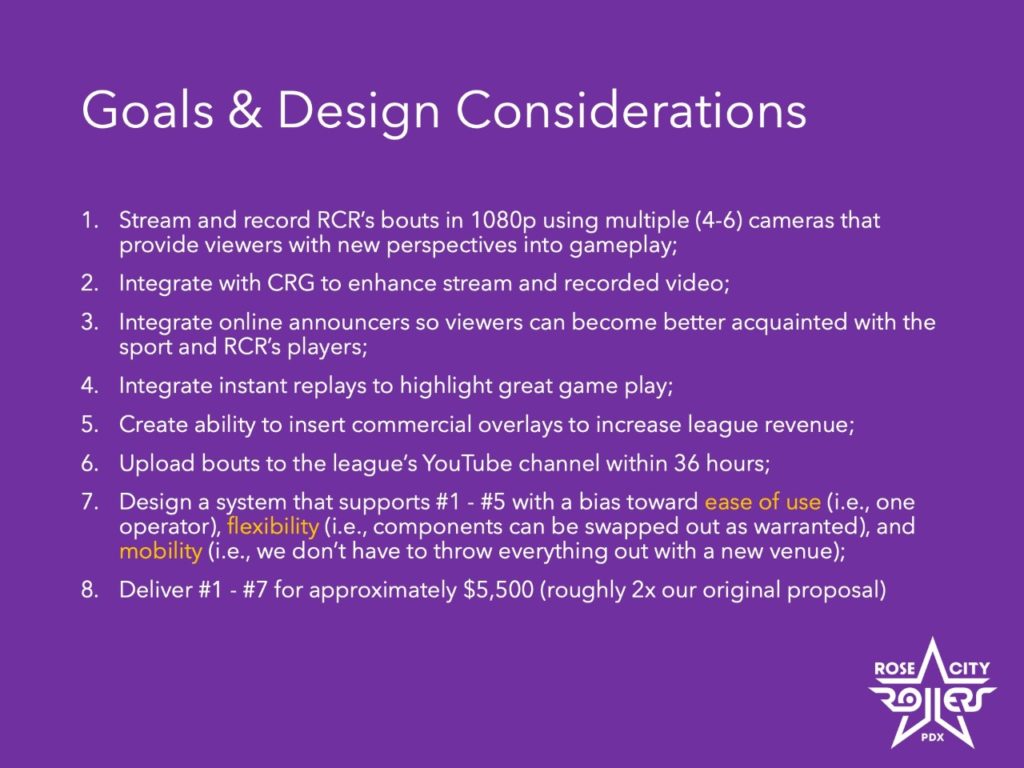 We left the meeting being asked to sketch out “Bronze,” “Silver,” and “Gold” options.

Bronze was basically the system that we initially pitched for about $2,500; Silver notionally doubled that and then Gold doubled Silver.

As we worked through them, a multi-camera Bronze system using webcams fell by the wayside because we could not consistently meet our expectations for video quality—we kept experiencing blurring and pixilation when we shot footage during scrimmages. This, ultimately, is the limitation of a webcam: they’re simply not designed to film action sports.

Gold was complicated and waaay too expensive: basically, we thought that the defining feature of a “Gold” system is that it would stream and record in 4K with optical zooms (we considered DSLRs and consumer-grade camcorders). Streaming in 4K is really hard (and expensive) to do with multiple cameras when you factor in the costs of cameras, the computer processing power needed to handle multiple 4K feeds, the amount of training system operators likely would need, etc.

That led us to a GoPro-based “Silver” option. It addressed several of the issues described in our design principles—but was affordable in the context of what the league historically spent on an annual basis with a commercial provider….and, with the GoPro cameras, we were able to get much closer to the track. We explained our vision to GoPro and they were generous enough to support it. We’re really thankful for that.

###
Stay tuned for Part 2, where Jonathan and Dennis will walk through the technical side of designing Rose City’s system. After that, they will talk about how you can build a boutcasting system for your league.