Pack it Up: How We Created an Incredible Volunteer Base 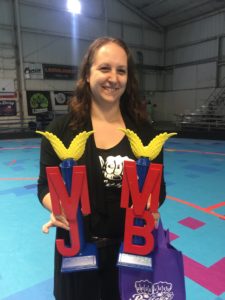 Volunteers: they make the derby world go ‘round. In RCR’s case, it takes about 600 of them (not including the 500+ skating members who are *also* volunteers). Coming up on our 15th anniversary, you could say we’ve learned a thing or two along the way about how to keep these pivotal members of our organization engaged and excited to keep coming back for more.

This week, we sat down with our Operations Manager, Heather “Hell Vetica” Keisler Fornes, as she dropped some knowledge from her tenure with our league. Whether you’re thinking of starting your own league, or just looking for some tips on top-notch volunteer management, there’s a little something for everyone here—read on!

How long have you been part of Rose City Rollers’ staff and what brought you to roller derby?

I started as a volunteer in September of 2009 as the Co-Volunteer Coordinator and was hired in March of 2012 as the Volunteer Manager. We changed the title last year to better reflect the growth of that role.

In terms of coming to the sport, I was a fan and I was looking for a place that focused on women’s empowerment that wasn’t centered in trauma. I also sort thought I’d probably meet some cool people and get a pretty remarkable resume builder.

How long have you been Rose City Rollers’ Operations Manager and what does the job entail?

The role entails management of all league human resources—paid and unpaid staff.

I make sure jobs are documented accurately, that we have training information (a never-ending task as that we’re always developing something), and that we are adapting positions and work teams based on current work; basically, I make sure that everything makes sense in the current year knowing that some of the original documentation was created years ago when the league looked very different.

In addition to that, I am also temporarily leading our development team as we make that a sustainable role for a future staff person; I oversee our broader technology implementation to make sure everything is working as well as we can hope and that all of the pieces are working together, at least somewhat; and a few other projects here and there as needed.

As you look back at your time as Operations Manager, what are the 2-3 big changes that you have seen the league go through in terms of its approach to managing operations? What did you learn from those experiences?

When I started there were 25 volunteers being “tracked” and in a Google spreadsheet. There were no documented roles and responsibilities and there were dozens of “committees” that sometimes only had one person on them (and all board members had to be a part of at least one committee).

Now we are pushing 1,000 volunteers—that includes skaters—in a database meant for that purpose. Most roles are documented (can you ever really be at 100% of anything?) and we increasingly have training support for our volunteer roles. We’re down to a much more reasonable number of committees—all of which have more than 1 person on them—and board members focus on strategy and policy over operations.

Things have changed a ton in every aspect of the league since 2009.

If you were to give advice to leagues that are growing (or want to grow), what would that advice be?

On the flip side, volunteers are still staff, so it’s okay to have expectations (that are fair, documented, and communicated) and to work with volunteers that aren’t meeting those expectations. No one strives to be bad at things, so if you have someone that isn’t thriving, talk to them about trying something else that is more interesting to them, or up their alley. And if they’re toxic, let them go.

How do you go about finding volunteers and matching their skills and interests with league needs?

We are lucky to not have to do a ton of active recruitment, so we can focus on retention and recognition. Between people coming in to skate, or thinking about skating, and fans who get excited, as well as families of our juniors, we typically have a lot of amazing people around.

The hard part is really in matching people to roles that feel like the right fit, and updating people-role matches as needed.

My favorite way to do the matchmaking is to grab beer or coffee (or sometimes a charcuterie board)  with someone and talk about the important stuff:

Then you can get a feel for passion, timing, skills, and personality. Since we tend to do so much work online, those in-person meetings are fun and one of the few times I might ever see a volunteer in the flesh!

What are the 2-3 books, articles, or websites that you’d recommend to people who play, or want to play, a role in managing their league’s operations?

Human Resources: I like to just follow what the big tech companies are doing and see how we can use their ideas. They have a ton of money to try things and they publish their results, so it’s a great opportunity to see where some of their cutting-edge ideas can be borrowed. One of the great things about being a “nontraditional” nonprofit is that we’re not held to the old school ideas about what a public organization can or can’t do. We get to be a new version of a nonprofit that is more entrepreneurial!