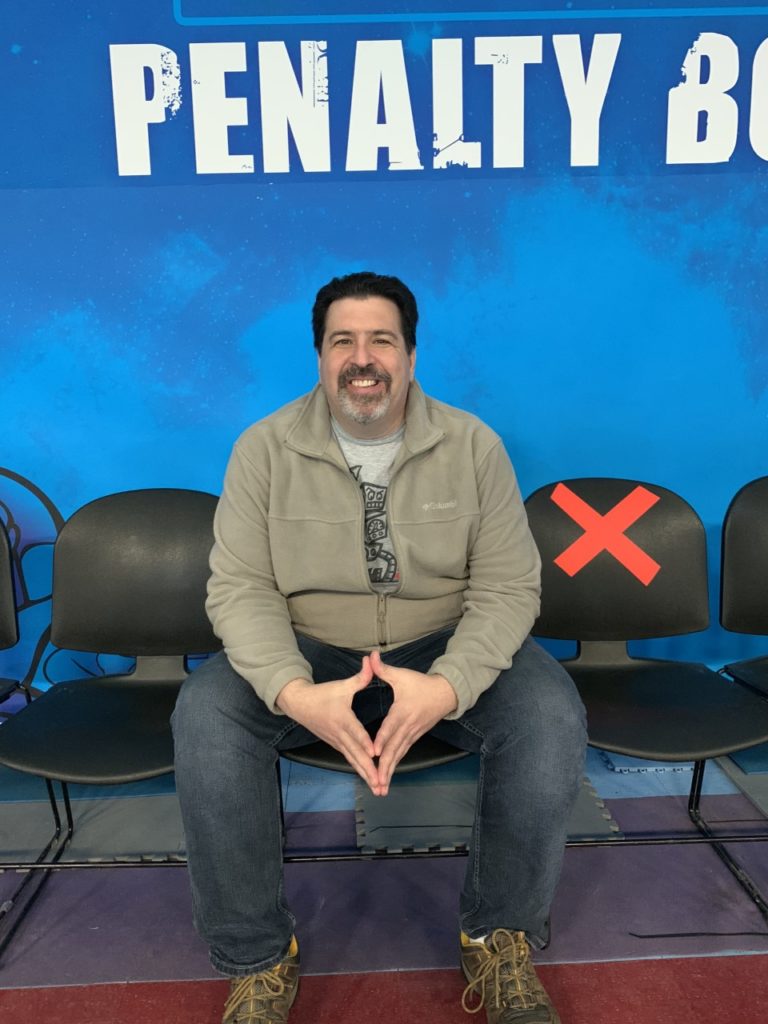 Dennis Gleeson moved to Portland and accidently found the quintessential Portland experience with the Rose City Rollers. Not only did he fall in love with a sport he found amazing, but he found a league whose values exceeded his expectations. Driven by our mission, he became a hard core fan and then a volunteer, opting to help with social media, and literally anywhere else he feels he can be of help. Dennis is great volunteer, an amazing fan, and a true believer in what this sport has to offer the community and world as a whole. As an ex CIA operative (kidding, sort of), he has found a new place to flourish and grow new creative outlets for his numerous talents. Thank you for all your hard work and dedication to Rose City Rollers, Dennis. With your help to our league and mission, our future looks very bright indeed.

Tell us a little about how you got involved with RCR:
I started volunteering with Rose City Rollers during the summer of 2017. I saw my first Rose City bout—my first roller derby bout period—when I was visiting friends here in Portland in 2011. One of the first things that I did when I moved here in 2016 was become a season ticket holder. Just before the 2017 home team champs, I told Rocket Mean that I was interested in volunteering. She asked for my resume and, perhaps despite my somewhat unusual background (ha!), I found myself facilitating strategic planning sessions for the Training Committee and helping them draft their 2018 strategic plan.

Now I run the league’s Twitter account, contribute to the league’s Facebook page, sit on the Marketing Committee and the Development Committee, and write most of the league’s press releases. The running joke is that if I get an e-mail asking me to come to a committee meeting, I’ll probably say “yes.” I want to see Rose City—and the larger sport of derby—succeed and will do whatever I can to help make that happen.

For as much as I volunteer, I really think of myself as fan of the league and the sport first and foremost. Since becoming a season ticket holder, I’ve done a lot of “derby tourism” and have to say that no matter where I’ve gone, I’ve only met some incredibly kind and amazing people. Even as someone who spends his time in the stands, the community is incredible. Why did I transition from being a fan to a volunteer? Rose City’s mission statement is powerful and the league’s values resonate with me: they were no small part of why I became a season ticket holder and, ultimately, a volunteer.

How does it feel to be a Gold Star Award for Excellence in Volunteering winner?
Incredibly flattering…and humbling. When I think about some of the other people who have been recognized with a Gold Star Award, I think my contributions pale in comparison to theirs. If anything, the award is a reminder to keep doing whatever I can to help the league.

Any suggestions for new volunteers or those considering volunteering with RCR?
Do it. I never volunteered for anything before I started volunteering for Rose City Rollers. Everyone has talents and skills that Rose, or any other league, can use. Since I started volunteering, I have been impressed by the passion, imagination, and energy that our members and volunteers bring to everything Rose City Rollers do. I’ve learned something about the league and the sport at every meeting I’ve attended. It means something to help “keep making it better.”

Final thoughts?
Like any award, any success that I have enjoyed is really due to the help and support of others: Rocket Mean, Hell Vetica, Kathryn, and Meg helped find places where I could use my skills to help the league; I never would have been able to write a press release if it wasn’t for its members—especially WOJ and AOA skaters and leadership—letting me in; and I really appreciate the willingness of photographers like Bill Zingraf and Paul “Preflash Gordon” Robertson to share their art with me in support of the our social media. I am incredibly grateful for everyone who humors my e-mails.