Rose City Rollers has a pretty straightforward mission as a non- profit but the real value of the league lies in its core values: 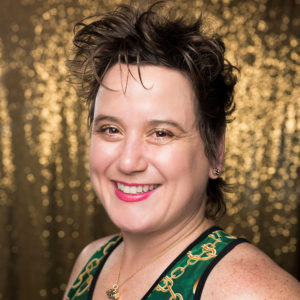 Skaters, volunteers, and fans alike are asked to bring these values with them and display them in the community. No one loves or displays these quite as emphatically as Maye Daye, our January Gold Star Volunteer winner. She believes in these values and how they effect change in her daily life as well as her derby life. She also makes sure to promote them as a volunteer coach for the Juniors Program, one of her many active volunteer duties amongst the league. Maye Daye’s favorite value, keep making it better, can be seen in how she shapes her performance on the track, how she engages with her peers, and how she displays herself in the community. Your league and community profusely thank you for all you do for us, Maye Daye!

What has being in RCR volunteer meant to you?
Being a volunteer for RCR has meant being a part of something that has a great impact on the community. I believe in our mission and core values and I feel proud to be contributing to a community that is bringing so much good to so many people.

Any suggestions for new volunteers or those considering volunteering with RCR?
I would give the advice to reach out to as many people as possible. Our community has such diversity that you are certain to find people with which you really connect. Additionally, I would recommend that they bring some patience for having to deal with SharePoint 😉

Tell us a little about how you got involved with RCR?
I moved to Portland from Flagstaff, AZ in the fall of 2014. I was one of the founding members of High Altitude Roller Derby (H.A.R.D.) in Flagstaff that began in 2011 and had about 50 members. Coming from such a small, but tight knit group, I was blown away with the size of RCR. The enormity of RCR made it so that you can get lost in the folds if you don’t get involved. When I was on Fresh Meat (that’s what we called it back then), I was lucky to get the opportunity to help with coordinating the Halftime games. That was a lot of fun. Then, I got drafted to the High Rollers and an opportunity to join the Board was presented to me. It was with the encouragement of our staff and some long term members of the league that I accepted this job. I remained a Board member for 2.5 years, but still stay involved in the Strategic Planning Committees dealing with leadership and community. Most of my volunteer time is filled with coaching our Juniors program, both a Petals Home Team (Killer Bees) and the Petals travel team as well as being an active member of the Junior Training Committee. I am also currently the Captain of the High Rollers. Filling these active Leadership roles for both an adult Home Team and in the Juniors Program has helped me contribute to the Strategic Planning groups for the Board that are the overarching plans for how we are going to ‘keep making it better’.

Final thoughts?
I’m just really grateful to be a part of a place where people are actively working on making themselves and the community around them better.