Our February Gold Star Award goes to Headache! Thanks for everything you do for us, Hedy! 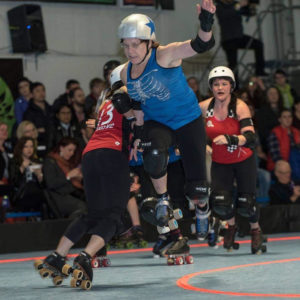 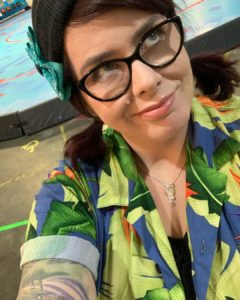 Let’s not argue this point… Caitilin Fleming has been around longer than you. She has watched this league grow up from the trenches and become this massive force it is today. She has done it all when it comes to volunteering, officiating being one of her regular jams. Now, though, you are more likely to find her hanging at the front entrance at bouts, smiling and being goofy. Besides being an awesome bout assistant, she also enjoys murder podcasts, D&D, and long walks on the beach… Oops, this took a weird turn. Anyway, Rose City Rollers is more than happy to honor Caitilin this March as our Gold Star Volunteer! Thanks for all you do and all you have done, this league would not be where it is today without loyal volunteers like you who help us to keep making it better.

Do you remember your first Rose City Rollers bout? Where and when?
My first RCR event as a fan was sometime in 2006 or 2007, and I actually think it was when Axels went to Seattle for the very first Rust Riot (I could probably look that up, but that would require a lot of digging,) I want to say, but my first as part of the league would have been the 2009 season opener 4×4 with Rat City at the Expo Center. I penalty timed. By myself. Yeah, I’m that old.

Did you ever want to be a skater?
There was a time when I did want to skate on a team, but I quickly found that I was well-suited for the officiating side of things. I like rules, and I’m loud, and there’s a slightly smaller chance of pain… but only slightly.

Why have you stayed involved with RCR?
RCR has always been a family to me, and a home to so many people from so many diverse backgrounds, and it’s never really dull. The people I get to meet, and the growth that I get to not only witness, but also help facilitate, is incredibly fulfilling. In the spirit of being candid, as of right now, I’m actually taking a sabbatical to focus on my personal life, work, and emotional and mental health, because I’ve learned that there’s nothing wrong with not burning the candle at both ends, but I know that should I ever want to come back to RCR, that I will be welcomed with open arms, and will be able to (relatively easily) pick back up.

How has RCR changed since you began volunteering?
When you’ve been around as long as I have, you see a lot, you get to be around for all of the successes and failures, and all those growing pains. We’ve gone from full stop production, with lighting effects and a whole lot of prep time, to focusing on the game instead, moved from the Expo to our own venue, we’ve lost people we loved, and finally graduated from the bridesmaid to the bride, so to speak. It’s amazing to look back at what has been, and what it is now.

Any suggestions for new volunteers or those considering volunteering with RCR?
Keep an open mind, be flexible, and most importantly, have fun. It can be loud and scary at first, but when everything is said and done, we’re all a family, and you’ll always be supported by someone out there.