Bridging the Gap: Supporting Derby on a Global Level

Many see Emerald City Roller Derby’s The Big O tournament as the first strides towards WFTDA’s International Championships and The Hydra. This year, for Rose City, it was also something else: an opportunity to connect with skaters from around the world.

Our fans love #euroderby. Love. It. In the past, they’ve had the opportunity to see teams like the London Rollergirls and Crime City Rollers compete at The Hangar for Hometown Throwdown. To have a European team come and play outside of that event was a real treat. So, on the evening of May 1st, a small group of our most passionate fans trickled into The Hangar to see a special bout between Dock City and the Axles of Annihilation. 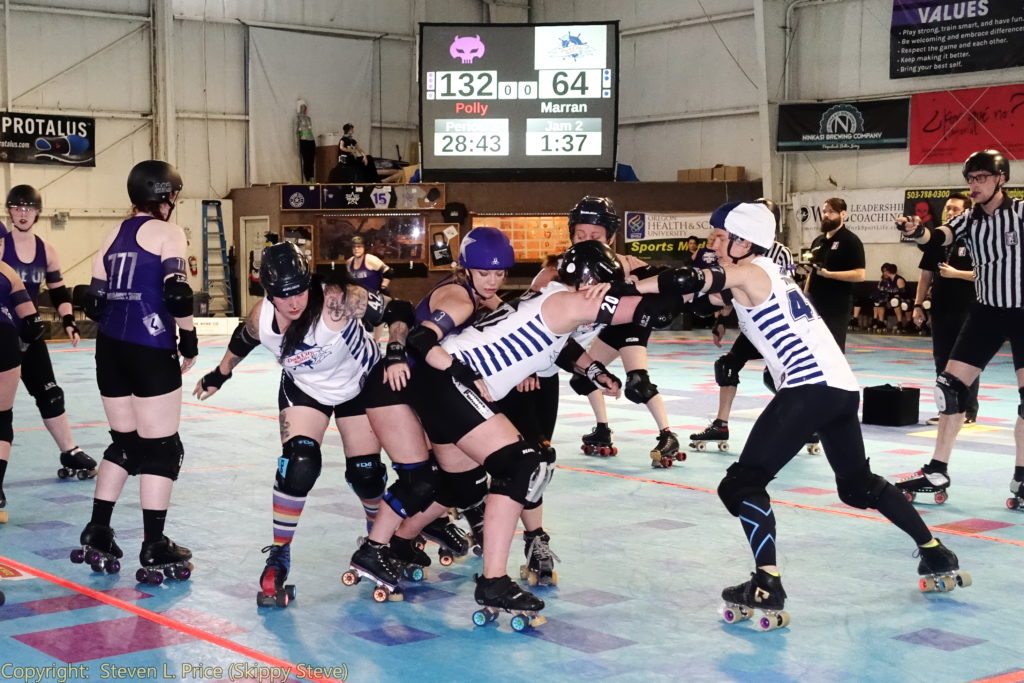 The Axles of Annihilation’s Polly Wanna Crack’er works her way through a tripod of Dock City blockers at a private game between the two teams at The Hangar. (Photography Credit: Steven L. Price)

“I was really happy when I heard we were going to play Dock City,” says Tegan N. Scare-ya, one of AOA’s jammers. “I had originally seen them play live at the Swedish Championships in Borås, Sweden back in 2014. Dock City’s performance excited me: teams like Crime City, Dock City, and Stockholm were dramatically under-ranked at the time and clearly had the potential to dominate the sport. Five years later, our game against Dock City didn’t disappoint! I’m excited to watch this team continue to climb up through the rankings.”

Dock City went on to win all three of their three bouts at The Big O…and, from what we saw, there were definitely Rose City skaters and fans cheering them on from the sidelines and stands.

Supporting Sailor City’s Skaters and Coaching Staff
One of the things that made The Big O special was seeing Rose City skaters supporting the skaters and coaching staff of Sailor City Rollers from Buenos Aires, Argentina.

“OMG WTF contacted us about this opportunity and we were thrilled to help,” says Yoga Nabi Sari, who was joined by fellow Guns N Rollers’ skaters Angela Death and Eve Anne Hellical. “These are the types of experiences I truly love about this sport: making new friends and learning about different leagues.” 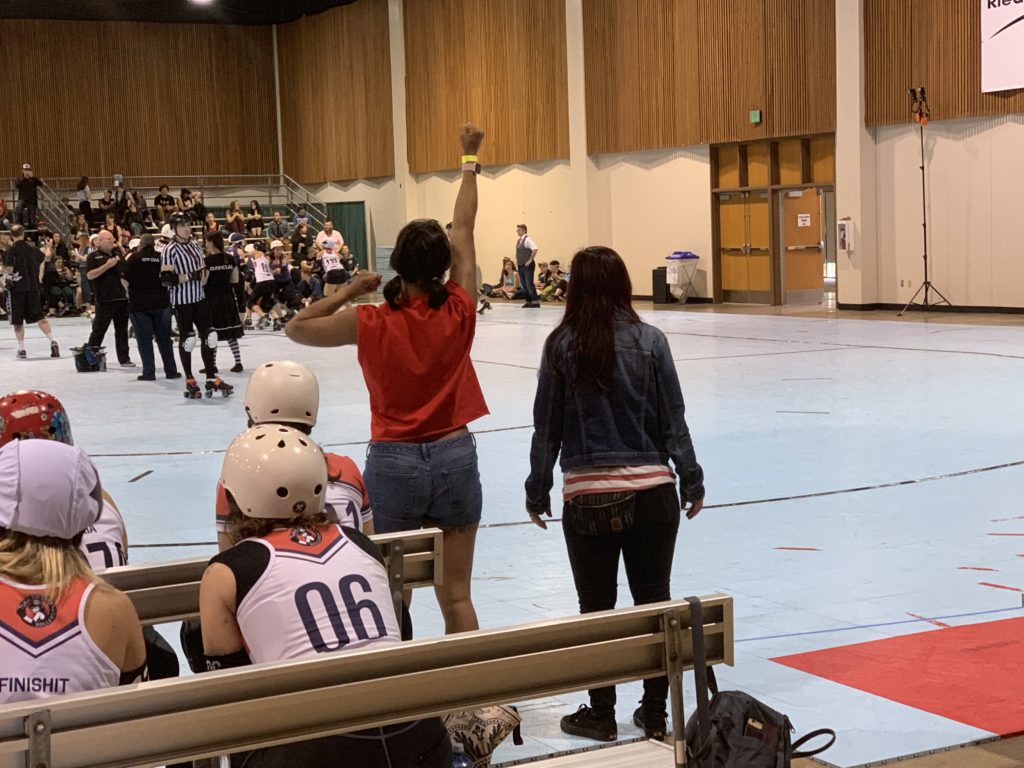 What was it like supporting Sailor City?
“It was an honor!” explains Nabi. “They were extremely talented, self-sufficient, and hardworking. They travelled far and they left it all on the track. Coaching another team puts into perspective the resources I have, and all the extra things I can be doing to train and give back to others. “

The bonds between Rose City and Sailor City didn’t stop in Eugene: several Rose City skaters hosted Sailor City skaters while they were in town and donated used gear to help their league, and the sport, grow in South America…and the donations continued when Sailor City joined Rose City for its closed-door Wednesday night scrimmage after the tournament. 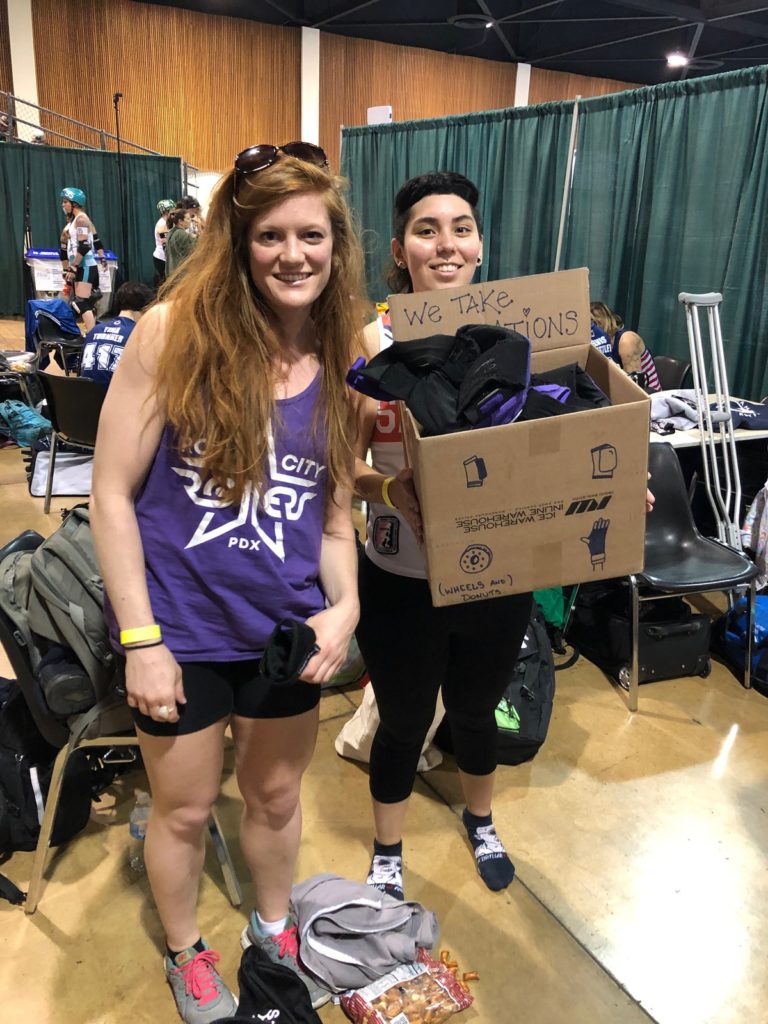 “Sailor City’s enthusiasm for the sport was contagious,” says Angela Death. “When Eve Anne Hellical donated her old pads before their game on Sunday, a skater in dire need of better wrist guards was able to use them right away. I can’t imagine how much it must have cost to get the entire team to the middle of Oregon, but once word got out to Rose City, people were eager to support their cause. After the Big O, we were able to collect even more gear and send it back with the Sailor City skaters who were staying with RCR league members.”

A Final Thought…
In wrapping up this conversation, Yoga Nabi Sari had this to say, “Derby skaters everywhere, take some time to learn about other leagues, visit, and make friends with skaters near and far! If your league visits a place and doesn’t have enough coaching staff, reach out locally to see who can help on bout day. So many skaters want to support each other!”

If you or your teammates ever find yourself in or near Portland, reach out to us. With a little luck, you can join us for a couple laps around the track at The Hangar or have folks like Nabi, Angela Death, and Eve Anne Hellical helping to support your team.