Rose City Rollers’ Axles of Annihilation (AoA) emerged as B-Team Champions after playing in a tournament that consisted of bouts between North America’s ten best “B Teams.”

Don’t let the “B Team” designation fool you: many of the top-tier roller derby leagues have two travel teams. In Portland, Wheels of Justice (WOJ) represent the A Team, the Axles of Annihilation represent the B Team. The difference between two is not as dramatic as you might think: B Team players often get called up to augment and, in many cases, eventually join the league’s primary travel team.

“In many ways, when you watch AoA skate,” says Kim Stegeman (a.k.a., Rocket Mean), the Rose City Rollers’ executive director, “you are getting a glimpse into the future of Rose City Rollers’ best. The skaters that participated in the tournament—be they from Portland or any of the other leagues—represent some incredible talent and the future of the sport.”

AoA entered the tournament in the as the number one seed. Over the next three days, they played—and defeated—teams from St. Louis and Austin before meeting Denver’s Bruising Altitude in the tournament’s championship bout. 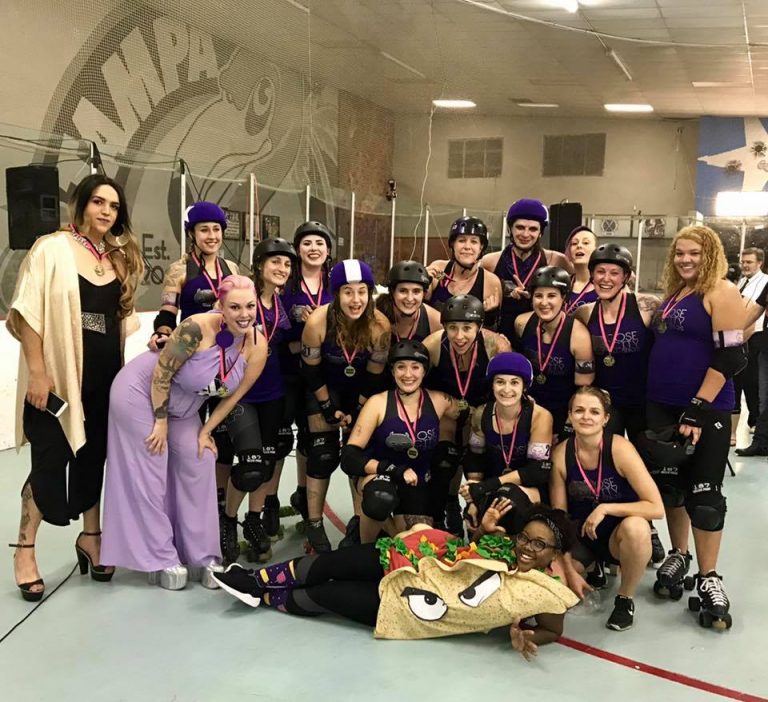 “Last year, we came into this tournament seeded 7th and took home the gold. This year, we came in seeded 1st,” says Bella Constrictor, the team captain. “Knowing how much B-teams change from season to season, we weren’t sure what we would be going up against. I was very proud to see our season of hard work and dedication pay off in such a big way!”

In a few short weeks, the Rose City Rollers’ Wheels of Justice travel to Philadelphia, Pennsylvania, for the International World Flat Track Derby Associations’ Championships in early November, where they hope to bring home The Hydra—WFTDA’s international championship trophy—for the third time. The championship bout of the tournament in Philadelphia will be broadcast on ESPN2.

If you want to catch the Rose City Rollers in person, you don’t have long to wait. The weekend of November 10-12 brings us three bout events. First up, the High Rollers take on Salem’s Cherry City Roller Derby on Friday, November 10th. Our recreational team, the Wreckers, hits the track against Morgantown West Virginia’s Roller Vixens on Saturday, November 11th, followed by the Rosebuds Junior Roller Derby Death Scar Derby Droids against the Undead Avengers on Sunday, November 12th.