As the summer draws to a close and we start thinking ahead to the 2019 International WFTDA Championships, we find ourselves thinking about the international community that is our sport. Events like RollerCon let us meet and learn from skaters from other skaters in other leagues that we might not otherwise get to play or meet. The great thing about derby is that is does not require an annual convention to do this; they often can be achieved by simply starting a conversation with a local league.

In this installment of our blog, Kari “Drive Bi Lova” Fass—a skater with the Wreckers and a member of Rose City Rollers’ Board of Directors—talks about her experiences with the Budapest Roller Derby Project and how you can take to the track at The Hangar with the Rose City Rollers if you find yourself thinking about a trip to Portland.

What brought you to roller derby? How long have you been involved in the sport and in what capacities?
My decision to skate came from a craving for community. It was right after a major break up, weeks away from turning 30, and I was feeling alone. I was in a small town and most of my friends were from work; there just weren’t places to meet other adults. Daq was a friend of another friend who had just moved away; we were out having drinks when she said, “I’m starting a roller derby team – you should join us.” I said no way, but she convinced me to come to the first meeting “just so there will be more people there.”

We met at a pizza shop in the mall and I sat there with maybe 12 people, all about my age, none of whom I had ever met before, which felt unusual in that small town. And I had a blast. We told stories and we laughed and I felt so excited about these new potential friends. I stopped at Wal-mart on my way home and bought the only equipment I could get locally: socks, kneepads, and a really thick, horrible mouthguard. It was nowhere near what I would need, but somehow making that first purchase made it feel real – made me feel like I could follow through on this very scary new adventure. I ordered the cheapest skates I could find online (in my head this wasn’t going to last long) and 3 weeks later I was at practice, 9am on a Sunday. And thus – the Rolling Hills Derby Dames were born. I think only 2 or 3 people had ever even seen roller derby at all.

That was 9 ½ years ago and I cannot imagine stopping anytime soon. I joined RCR when my family moved to Portland in 2012. Since then, I’ve done a lot of different things: greet people at the front door of games, teach fans about derby via Purple Reign, organize the first couple of public Wreckers games, serve as a mentor in the Wrally program…. At my old league I taught the equivalent of our 101 class too! I like volunteer positions that put me face to face with people who are getting stoked about the sport and the mission.

You make a point of skating when you travel. Talk about that!
Roller derby training takes a lot of time and somewhere around my 4th or 5th year playing, I realized that there was a lot of traveling that I also wanted to do! My partner travels a ton for work, so I started taking roles that would allow me to go along sometimes.

As we went, I started reaching out to the local leagues. I did drop ins with Bay Area Derby, Windy City Rollers, and the Des Moines Derby Dames (which evolved into Team United Roller Derby) in roughly a 2-year span.

Not only do the practices keep my muscles engaged, but I learned different drills and new ways to explain strategy. I see the types of venues that other leagues are using, hear about the history of local leagues, and learn what challenges they’re facing as nonprofits.

I had, however, limited this kind of adventure to my travels in the United States. The couple of trips my partner and I took overseas always seemed too short, with lots of brief stays in different locations, so I didn’t want to lug my gear. Earlier this year it looked like one of their trips was going to be two and half weeks – all in Budapest. Totally worth taking my gear! 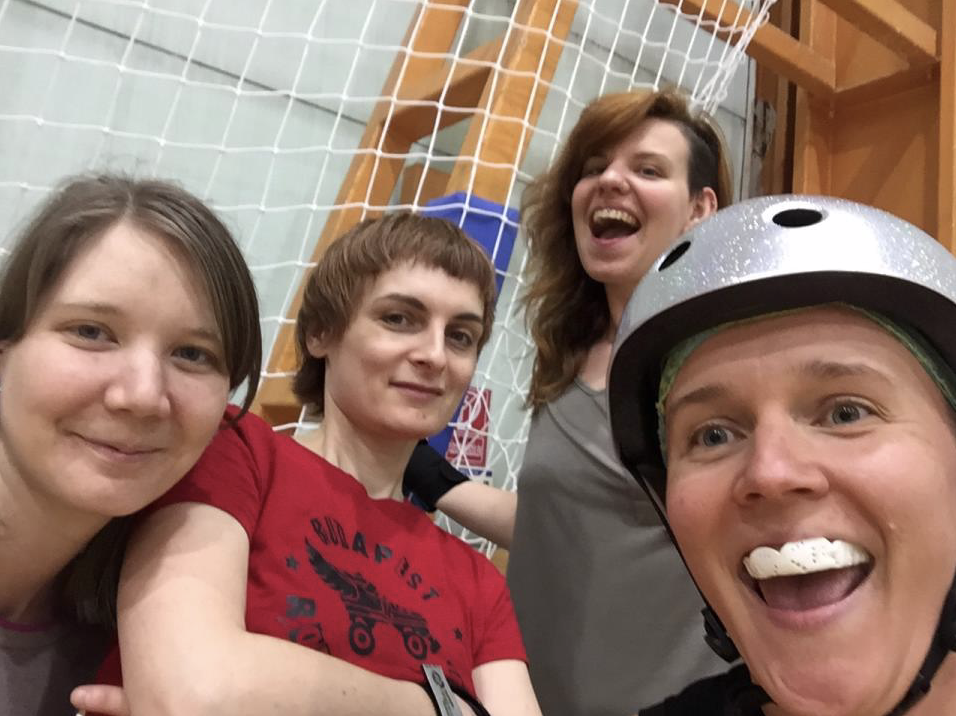 What was it like reaching out to and skating with the Budapest Roller Derby Project (BRDP)?
About 10 days before we headed over to Europe, I chatted with someone in the league via Facebook messenger. They said BRDP had a new practice space and that I could join them. HOORAH!

I was EXCESSIVELY nervous walking in for my first of two practices. I didn’t know how many folks would speak English, how reliable the transit was, if I’d be late, how skilled the skaters would be… the list of things to worry about was long in my head. I had Google translate open on my phone and was desperately trying to memorize the words for inside/outside and left/right in Hungarian.

Three fabulous skaters walked into the university gymnasium, where I was already nervously geared up. They explained that they were a start-up league and not only did they have a “new” practice space but that it was their first practice in over year. They were just excited to be on skates again!

Practicing with them was a blast. We laughed and chatted while we skated around in circles. One skater was very new, so she didn’t really know what the game was, so the rest of us talked about how it’s played and who some of our favorite celebrity skaters are. I covered what 101 drills I could think of and offered to more formally lead a practice the next week.

On our way home on the train, they told me about the other venues they had tried and how the group had been much larger before they lost their practice space. I was at start-up league before RCR, so I knew how losing a venue could crush a group’s finances and morale. We swapped recruiting strategies, talked about getting some practices plans from RCR coaches, and about how Derby Without Borders might be able to help with more gear (their local skate shops don’t yet carry everything they need). The second week I was there, we ended by playing sock derby. We all took off our skates and practiced strategy and rules, full contact.

To learn more about the Budapest Roller Derby Project, check out their blog or find them on Instagram and Facebook.

What do you like about skating with other leagues and why do you think more people should do it if they have the chance?
I loved the laughter and the smiles that BRDP and I shared. Roller derby is fun. It is hard and it is exhausting, but at the end of the day: it is fun. I got to swap my love of roller derby with strangers-turned-friends. I felt reinvigorated by their determination to get a team off the ground and hope I was helpful with some of the things I shared.

My partner also loves “derby tourism” because it allows us to go to different parts of each city that we might not have seen otherwise. We’ve bussed and ferried our way all around – I think my mom even dropped me off for a practice one time!

Next on my list? Overcoming my fear of skating in bowls, which the Budapest gals all knew how to do! Also, skating with Belfast Roller Derby. I’m hoping to make it back to Europe in the next year or two. I bought a smaller bag with wheels so I don’t exhaust my shoulder carrying my gear bag through a day of cancelled flights! Next time, I also want to take more selfies, invite more people out for a drink or a meal, and made more Facebook connections.

If someone who reads this is going to be in Portland, can they practice with the Rose City Rollers?
Absolutely! I see skaters drop in at Wreckers’ practices all the time!

The routine seems to be universal: much like I did in Budapest, we walk in, mildly certain we are in the right place, trying to figure out who’s in charge, trying to remember people’s names, hoping the practice is at the right level for us, hoping we’re not late, wondering if we ate/drank enough… just generally nervous. Inevitably, somebody notices, gives them a big smile, introduces them to the coach, gets the WFTDA waiver signed, and we do names and pronouns at the start. We all have a blast because it is 2 hours doing this thing that we all love so much.
———————————————————————————————————————————————————
Interested in dropping in to practice with the Rose City Wreckers?  You can! All the info you need is in our FAQ.